RESISTANCE WITHIN THE MUSEUM FAUNA

Here are the artworks that belong to the thesis Resistance within the Museum Fauna – Challenging Anthropocentrism through Counter Art Histories and Non-Human Narratives. The artworks are structured into four different sections: text-based artworks, performance onsite, performance online and video works. Not all artworks are fully visible here on the site because of the nature of the work or the specific setting, such as conference presentations.

THE SCRIPTS - text based artworks 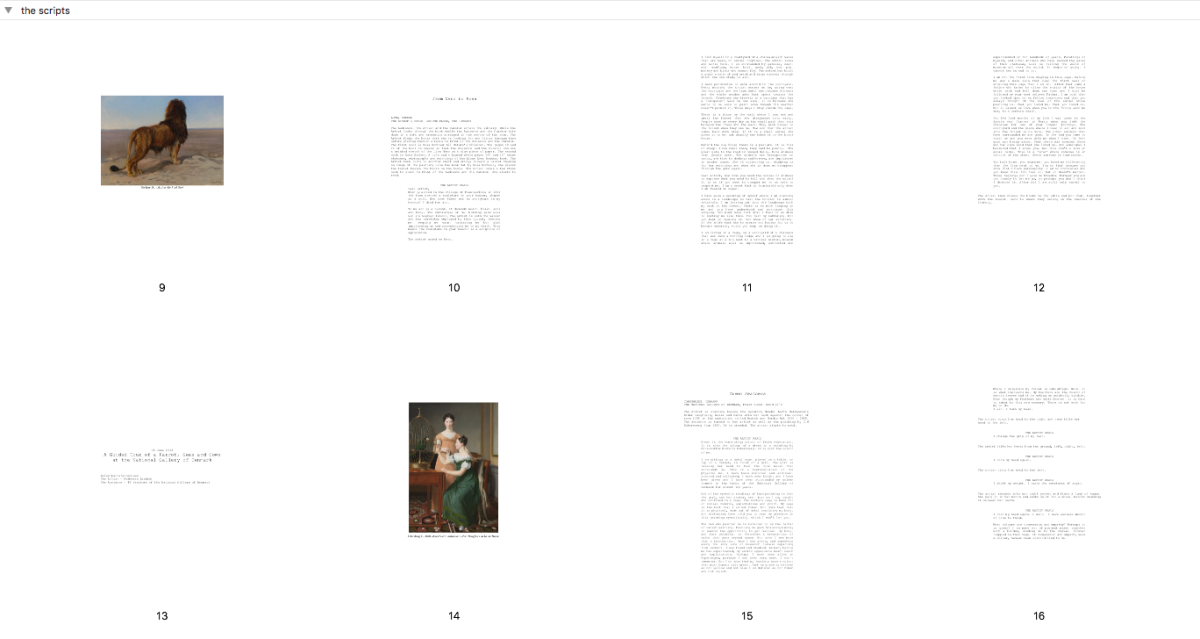 A Guided Tour of Lions and Cattle at the Bishop’s House in Lund was performed in connection to the 5th European Conference for Critical Animal Studies and with generous support from the Bishop’s House and Lund University Art Collection.

These are the three paintings that the work is based on:
Flodlandskap med boskap (Riverbed with Cattle) n.d by Aelbert Cuyp
Ladugårdsinteriör (Barn Interior) n.d by Anon
Lion (The Look Out) n.d by Rosa Bonheur

Here follows images documenting the tour at Nationalmuseum on October 27 2017. The entire text-based work is found in THE SCRIPT. 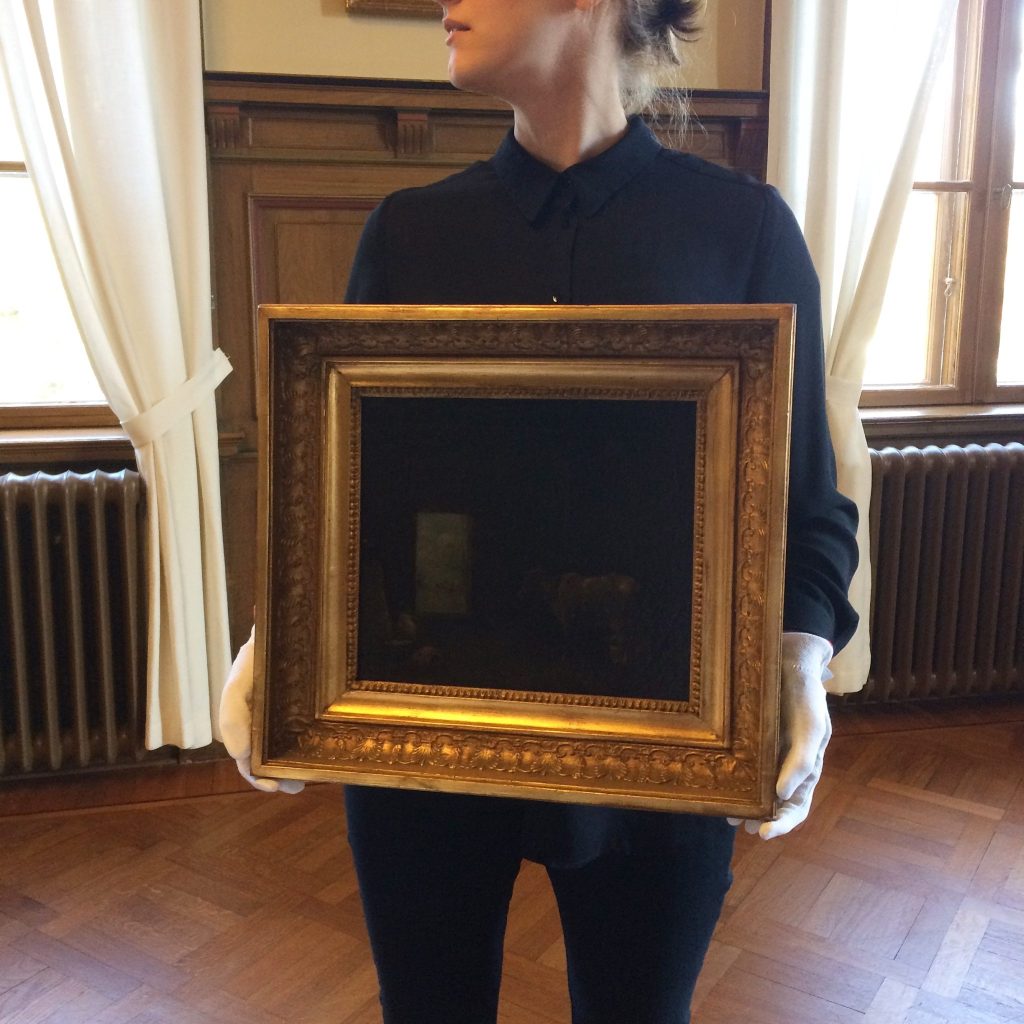 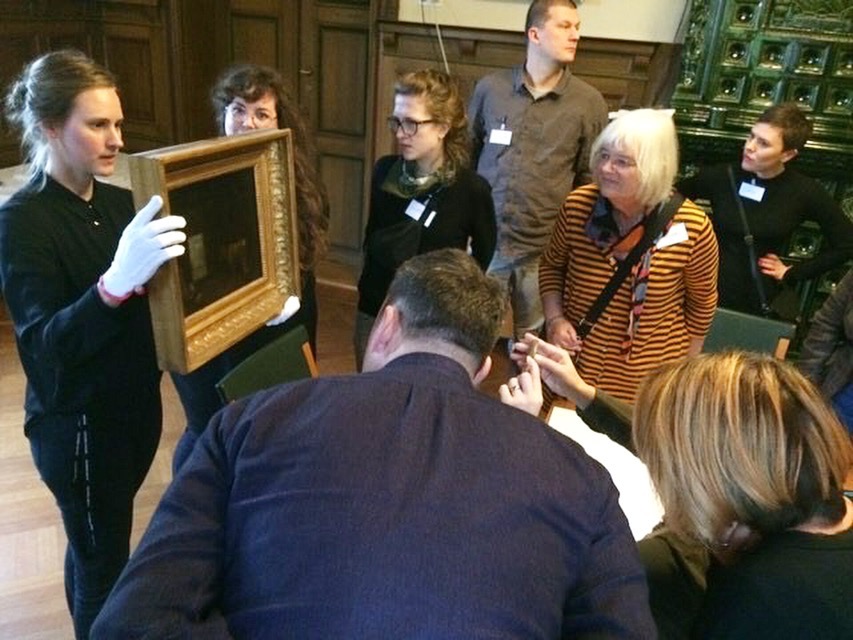 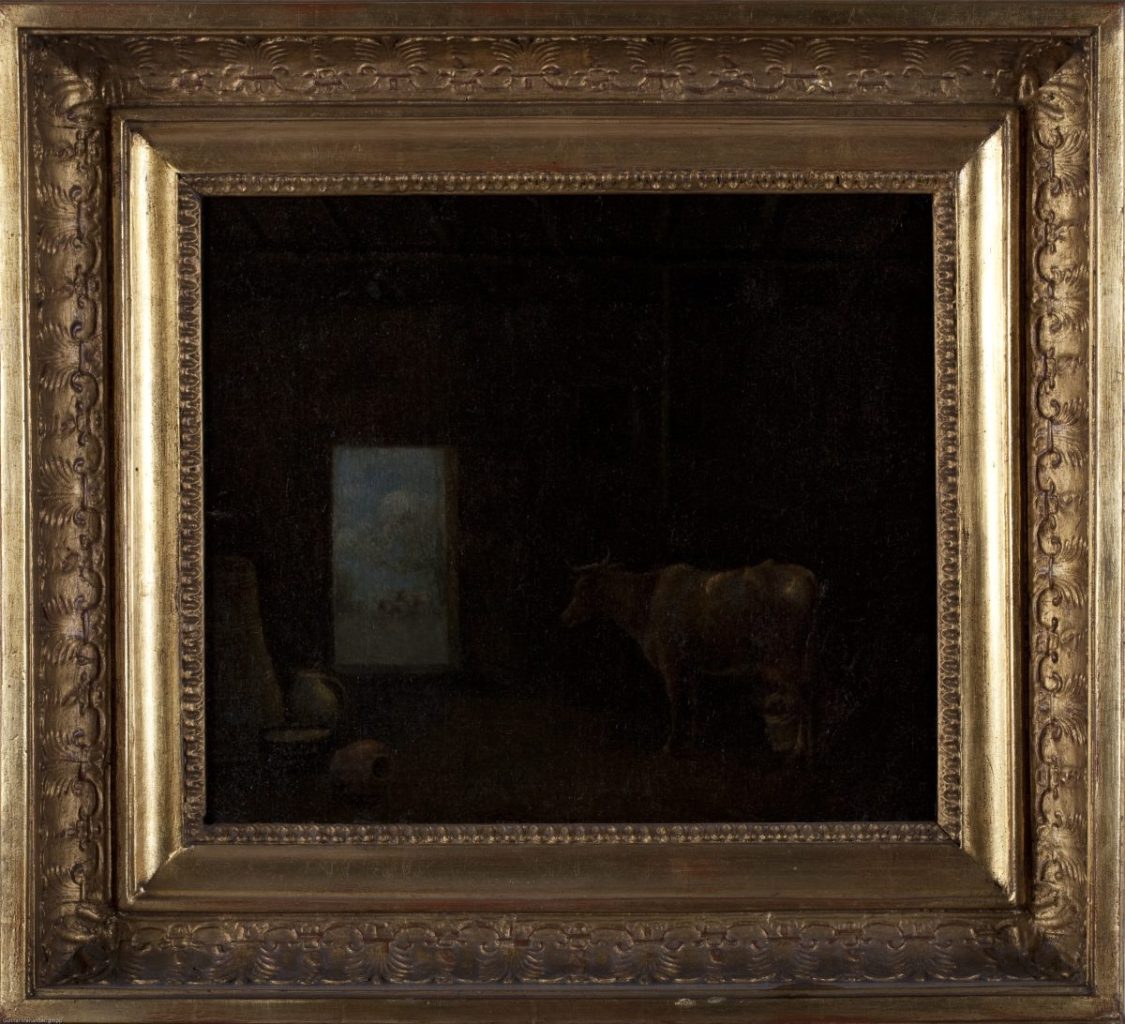 WHITE PIGMENTS OUT OF BONES
The Bishop’s House, third floor, The Grand Hall

Titanium white was produced for the first time in 1820. Production in an industrial scale didn’t start until one hundred years later. Titanium white is highly opaque. You can’t see what is hidden underneath. It covers. At the same time as a thick opaque white surface can be painted by artists, the industrialization of cows picks up speed. Thousands and thousands of litres of white, running through pipes. Slowly as the whiteness thickens the reality at the factory becomes even more impenetrable, non-transparent, cruel and effective.

The Artist puts the paper card back from where she picked it up. She moves the two milk jugs so that they are placed in front of her on the table. She picks up the metal tube with titanium dioxide, removes the cork to squeeze the paint into one of the milk jugs before she puts the cork back on and puts the tube down. She takes the milk jugs in her hands and with her right hand she pours the water from one milk jug into the other that contains the paint. She moves the milk jug that now contains both paint and water to her right hand and pours the liquid back into the milk jug now placed in her left hand. The water is no longer fully transparent but has a very slight white colour. The Artist repeats the procedure, shifting hands and pouring the fluid from one milk jug to the other. The liquid becomes whiter. She repeats this procedure, pouring the liquid back and forth, until it turns into an opaque white. The Artist puts the milk jugs down. The artist reads:

I have white milk. White milk that will keep my sisters in shackles for millennia. I have white bones. White bones that can create white pigment that can shape form and sunlight and therefore landscape.

– At Nationalmuseum in Stockholm –

A Guided Tour of a Squirrel, Marmot, Cat and a Capercaillie at Nationalmuseum in Stockholm

A Guided Tour of a Squirrel, Marmot, Cat and a Capercaillie at Nationalmuseum in Stockholm was performed in collaboration with Nationalmuseum and Konstfack Research Week and partially funded by Konstnärsnämnden through a project grant.

Here follows images documenting the tour at Nationalmuseum on January 30 2019 and an excerpt from the performed text. The entire text-based work is found in THE SCRIPTS. 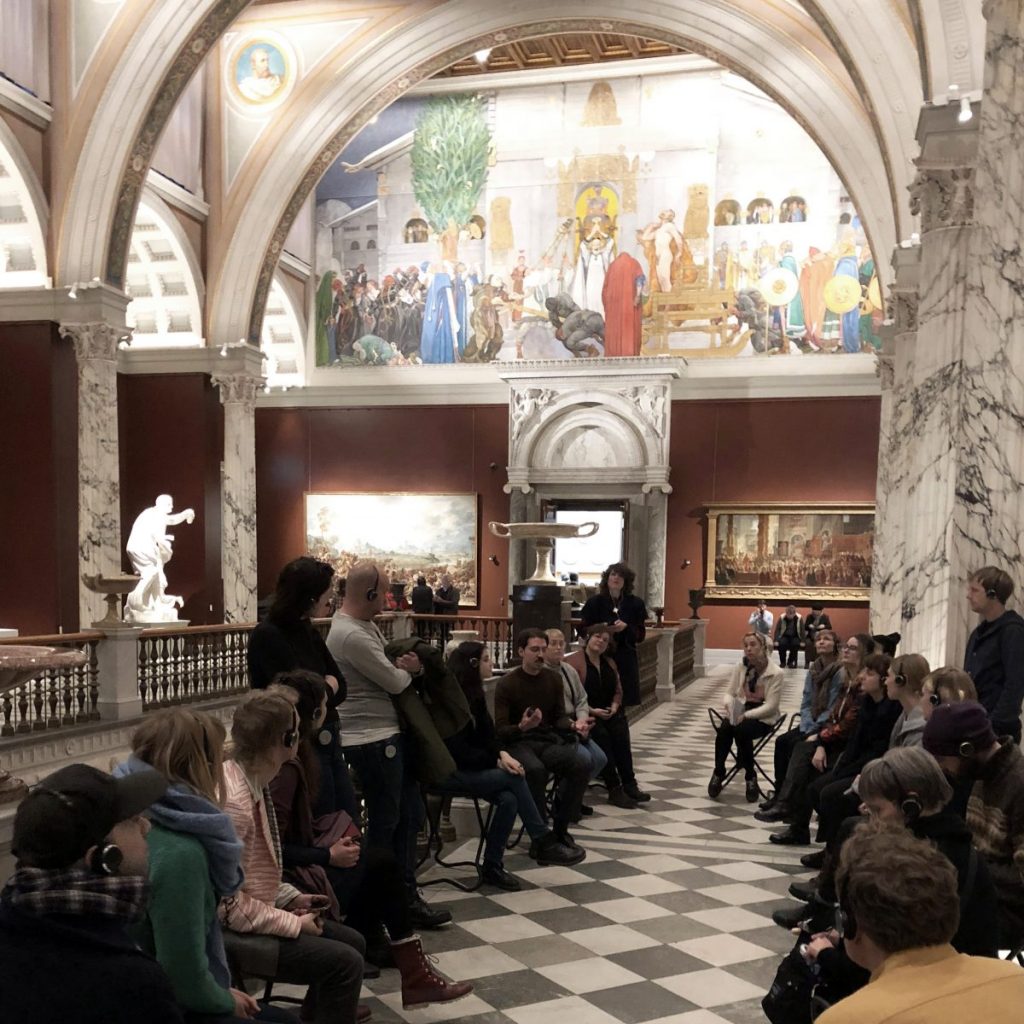 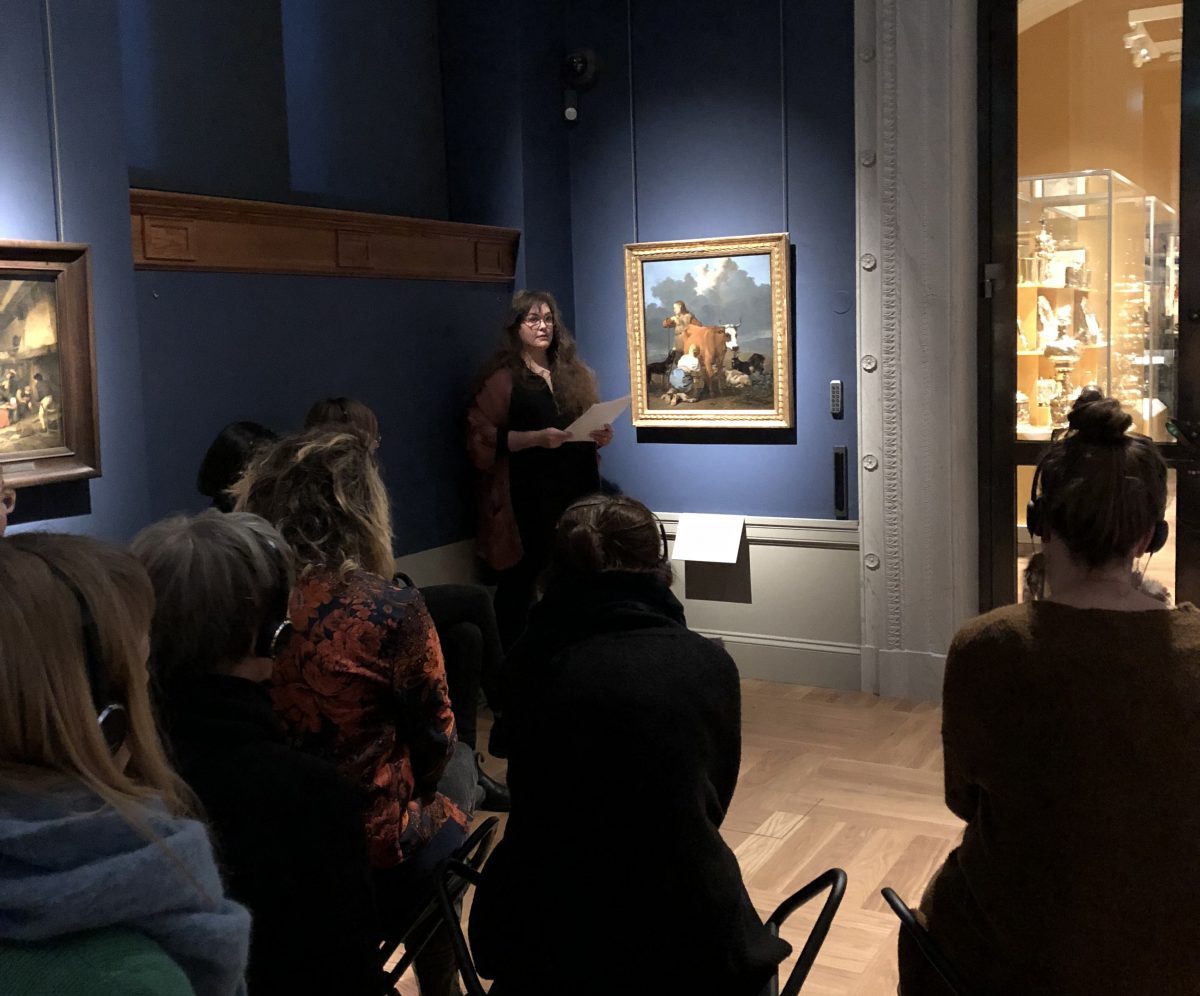 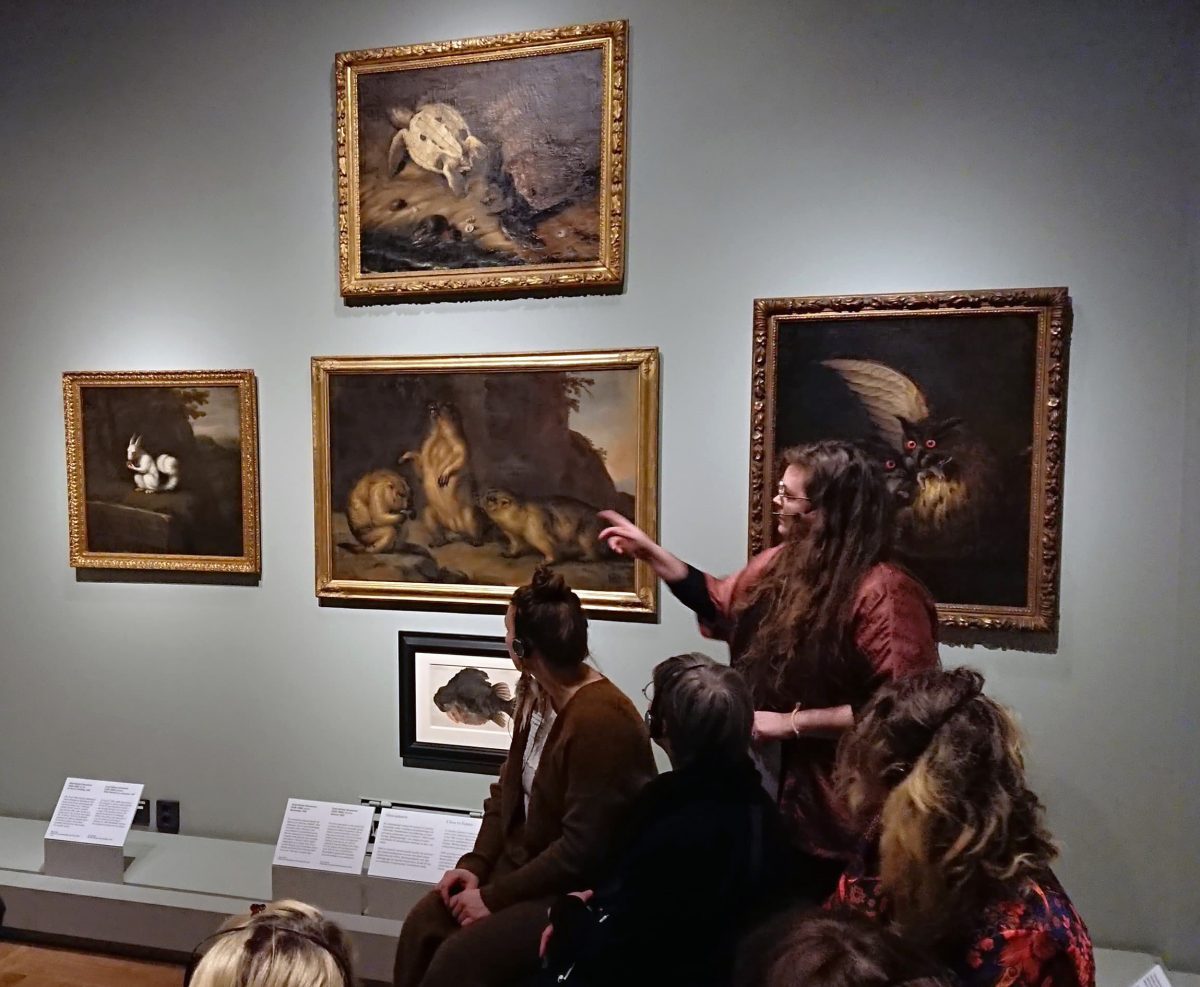 – At the National Gallery of Denmark –

A Guided Tour of a Parrot, Gees and Cows at the National Gallery of Denmark

A Guided Tour of a Parrot, Gees and Cows at the National Gallery of Denmark is a text based artwork written to be performed as a guided tour. It was written for the exhibition Danish and Nordic Art 1750-1900 at the National Gallery of Denmark and evolves around the experiences of the non-human animals inhabiting six of the paintings that can be seen in the exhibition.

Green Feathers was made in connection with the European Society for Literature, Science and the Arts Conference GREEN 2018 and the event Green Friday at the National Gallery of Denmark, and partially funded by Konstnärsnämnden through a project grant.

Here follows images documenting the tour at the National Gallery of Denmark on June 15 2018 as well as an excerpt from the performed text. The entire text-based work is found in THE SCRIPTS 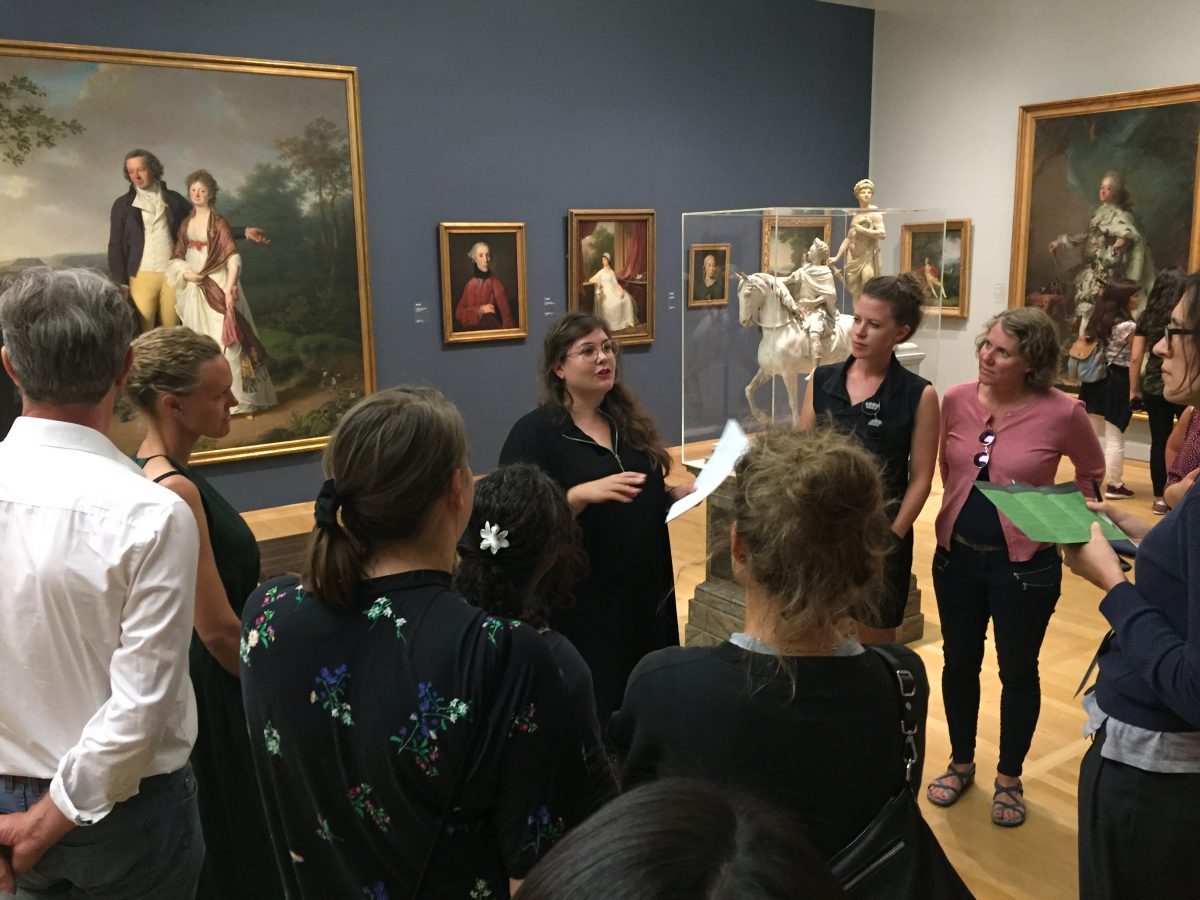 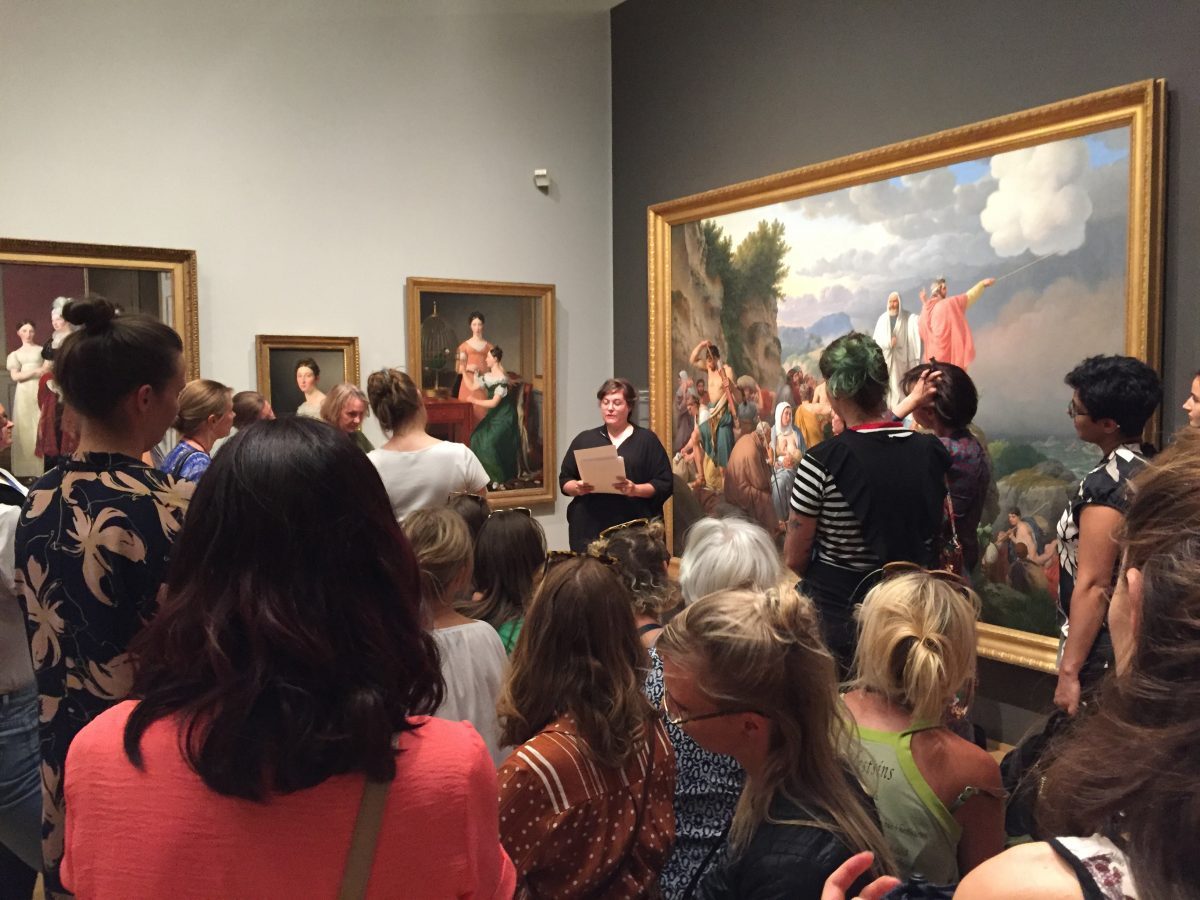 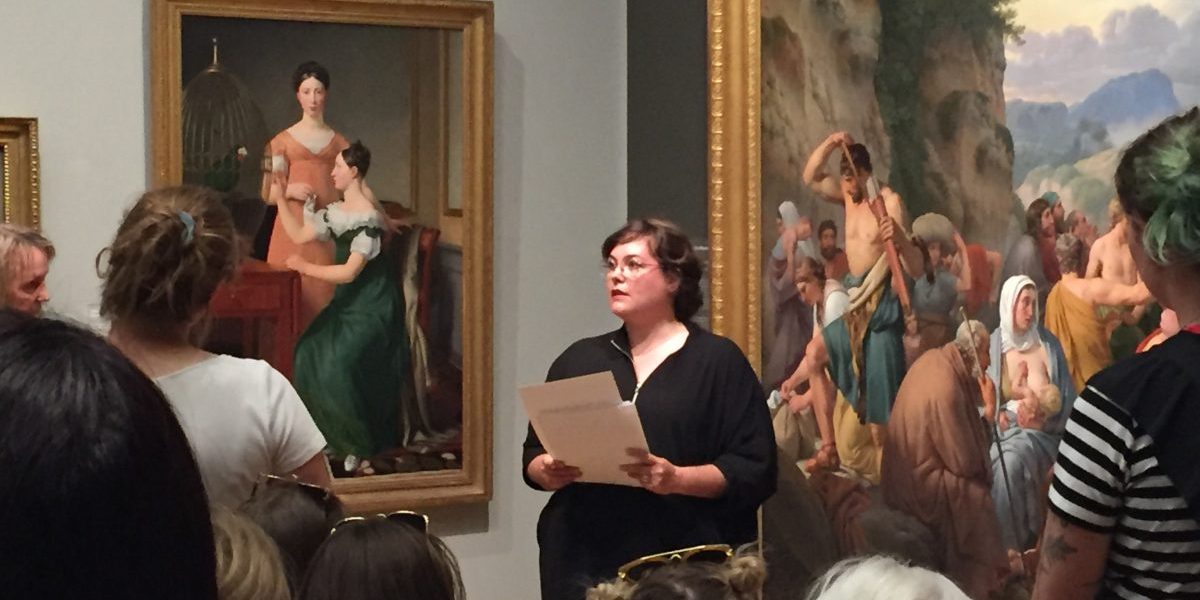 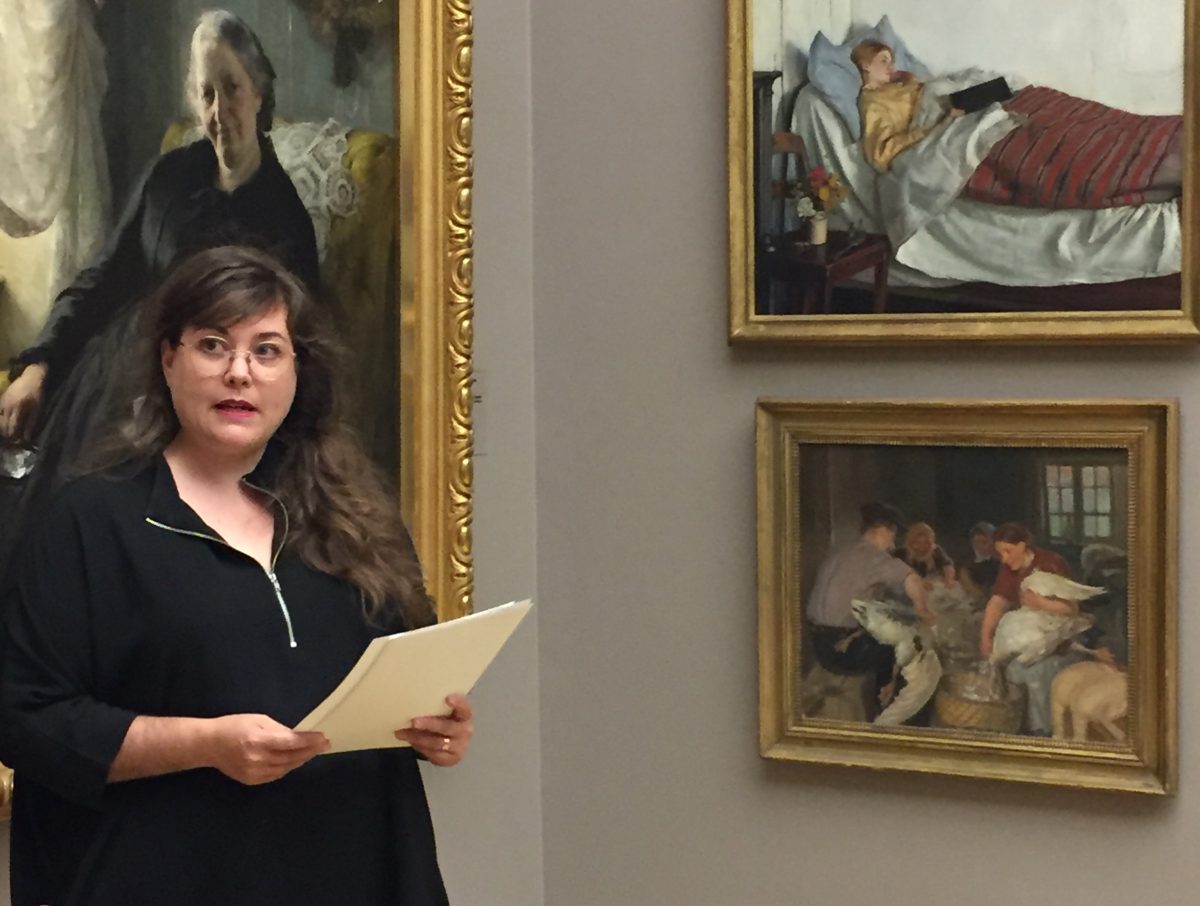 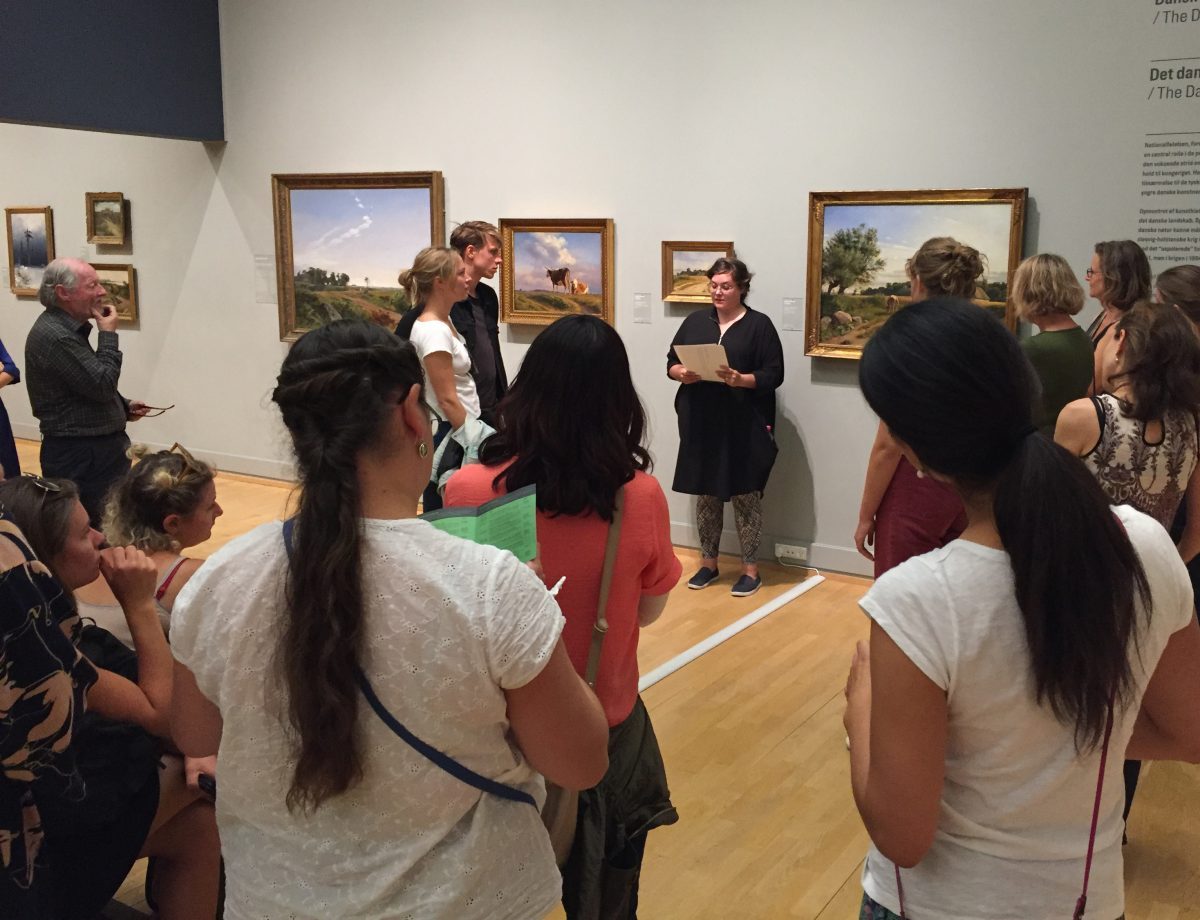 – At the European Association for Critical Animal Studies Conference 2021 –

Resistance within the Museum Fauna – a reading of a ten meter long collage is an online presentation/performance at the European Association for Critical Animal Studies Conference in 2021 that presents counter art historic narratives for the 59 paintings involved in different layers of this thesis.

– At the Multispecies Heritage Conference –

Tearing the White Glove – a wild cat resists and Mossy Boulders – eight cows resist is an online performance/virtual guided tour as part of a presentation at the Multispecies Heritage Conference November 26, 2020. The guided tour visits Nationalmuseum in Stockholm and The National Gallery of Denmark.

– At the Conference Multispecies Storytelling in Intermedial Practices –

The Birds – Red, White, Green is a performance/virtual guided tour as part of a presentation at the conference Multispecies Storytelling in Intermedial Practices. The guided tour takes place at Nationalmuseum in Stockholm and The National Gallery of Denmark in Copenhagen. It was originally performed live at the conference and later it has been performed and recorded as an online event at Konstskolan Munka.

– The Artist Named Me Nero –

The Artist Named Me Nero is a video work about the lion Nero, caged by the French animal painter Rosa Bonheur at her castle in Fontainebleau and portrayed in several of her paintings. The video tells of an alternative history of the paintings of Nero, from the perspective and life of Nero himself.

What is it like, as a non-human animal, to be part of the history of art and its production system, that often seem to build upon oppression and violence towards the ones not human? What happens if we refuse to read the once living, and portrayed, symbolically and instead focus on their relationships and agency?

The video brings forward the imagined experiences and dreams of Nero, by telling a less anthropocentric version of history while using anthropomorphism and empathy as methods to imagine these new experiences.

Supported by Konsthallen at Falsterbo Strandbad and Julius Dahlström, performed at Weltkunstzimmer for for the opening of the exhibition Goodbye Cruel World It’s Over.

– Resistance within the Museum Fauna –